Compare the differences between Office 365 and Google Apps

In this page, we will list out and compare the differences between Office 365 and Google Apps.

Microsoft’s Office suites have long since been established as a world’s industrial standard for creating documents, spreadsheets, and presentations. The file formats used by these programs are often mandatory when collaborating with others on projects.

As such, Microsoft Office suite is definitely the better choice for use in a more formal setting in work or in school.

Google started out as a search engine company, not a document processing software developer. Its main stream customers lies in the internet and also in the future to come.

Table of strengths between the apps and the company

Overall comparison in a nutshell

Neither online version has all the features and power of the full desktop Excel, but both probably offer enough for most users most of the time.

Also, it’s much easier to find training materials online and consultation services for Office due to its long time over the years services since its establishment at the end of the last century.

Over the years (especially in the last year) — Google has changed and dropped its many online services, leaving users in the lurch.

Offline installed software like Office 2013 are obviously useful when Internet connections are poor or unavailable (for example, on an airplane).

Microsoft includes SkyDrive Pro and a whopping 7 GB per user with Office 365. Google Apps for Business customers get 5 GB per user.

Microsoft’s SLA, to back up its reason for the higher premium, actually credits fees back to the customer if there is a downtime and its guaranteed uptime is stated at a higher percentage than Google’s.

It is a fact that Google makes changes or discontinuing its internet services a regular occurrence and quite often short-timed. So if Google has to made these changes, who’s to say that the company won’t discontinue or cripple some services you rely on?

On the other hand, Microsoft’s record on maintaining old, obsolete, even problematic products and services (let’s say Windows XP and 98) is much better. Can you still remember someone used Windows 98 and still refuse to change?

In general and in history as recorded, Microsoft keeps legacy software for 10 years before announcing it to be scrapped off. 10 years is considered a long time in terms of technology changes in the information era of now.

Below are more comparison information you can see:

Case studies of businesses showing why they choose Office 365 over Google:

Professional advices on the differences:

Read a true story about why a business switched from Google Apps to Office 365: 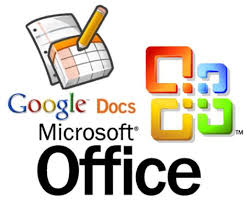 Do contact us below to find out more about how Microsoft Office 365 can help in your business.